(HEERBRUGG, Switzerland, 17/12/2020) – Leica Geosystems, part of Hexagon, and RiVR, a UK based developer of Virtual Reality assets in both 360 video and photo realistic virtual reality room scale experiences have been showcased on the UK’s Gadget Show, series 32, programme 11.

The Gadget Show (series 32, programme 11) showcased just how ground-breaking the RiVR/Leica Geosystems partnership is. The show, through an extended VT at the end of the programme, demonstrated just one of the projects that RiVR and Leica Geosystems are working together on, Guy’s Cliffe House. Using the Leica RTC360 3D laser scanner and the Leica Aibot UAV to do aerial photogrammetry. The show’s host, Craig Charles even admitted to being challenged by the technical elements captured in the show

Photogrammetry is the science and technology of obtaining reliable information about physical objects and the environment through the process of recording, measuring and interpreting photographic images and patterns of electromagnetic radiant imagery. The term photogrammetry originally coined by the Prussian architect Albrecht Meydenbauer.

The RTC360 laser scanner makes 3D reality capture faster than ever before. With a measuring rate of up to 2 million points per second and advanced High-Dynamic Range (HDR) imaging system, the creation of coloured 3D point clouds can be completed in under two minutes and visualised immediately in the field using the Leica Cyclone FIELD 360 mobile device app. Plus, automated targetless field registration (based on VIS technology) and the seamless, automated transfer of data from the Guys Cliff House site to the RiVR office meant that the project scanning and filming for the show was completed in just one day, maximising overall productivity.

Small and lightweight, the RTC360’s portable design and collapsible tripod mean it’s compact enough to fit into most backpacks, ready to be taken anywhere, Phil Marsh, UK Sales Manager – Reality Capture at Leica Geosystems said “This scanner was an ideal solution for the ground breaking work that RivR are delivering for the Guy’s Cliffe House project”. 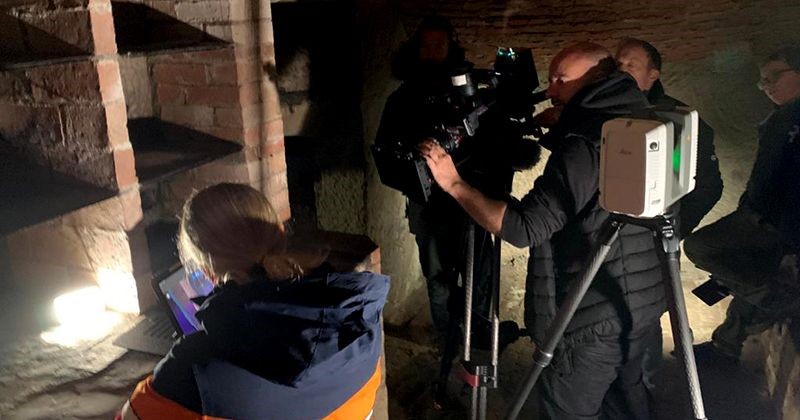 Alex Harvey Co-founder RiVR – “We have partnered with Leica Geosystems for over five years and use their laser scanners to produce high res topology, we use laser scanners when we scan large environments that don't lend themselves to photogrammetry, then we overlay high res imagery to produce millimetre accurate photo realistic environments of any size. This partnership, based on quality and accuracy of the RTC360 scanner and software allows RiVR to produce mind-blowing physical interactions through VR technology.”

The RTC360’s low noise data allows for better images, resulting in crisp, high-quality scans that are rich in detail and ready for use in a range of applications. Combined with Cyclone FIELD 360 in-field software for automated pre-registration in the field, the RTC360 scanner offers outstanding precision that can be checked on-site.

Photorealism is the fundamental goal at RiVR. It immerses the VR user a great deal further than traditional computer-generated imagery. All of RiVR’s environments and objects organically, scan real world objects and environments, moving away from the more traditional synthetically created computer generated ones. This produces a new set of challenges and different workflows. RiVR in partnership with Leica Geosystems are more than up to the challenge even developing mobile rigs which can scan objects as small as a match box or as big as a castle. As Channel 5’s Gadget Show so well demonstrates.